(No reviews yet) Write a Review

The 2008 and newer four-stroke KTMs  (and some earlier SX models) use a timing chain tensioning device  intended to develop its force using the engine oil pressure  hydraulically. The OEM components have serious flaws (reviewed below),  which can leave the timing chain in a slack condition. This can have  disastrous consequences.  Dirt Tricks has developed a simple, effective  and failsafe replacement. The new tensioner correctly captures the oil  pressure. Additionally, it uses a positive mechanical ratcheting system  which prevents it from collapsing. 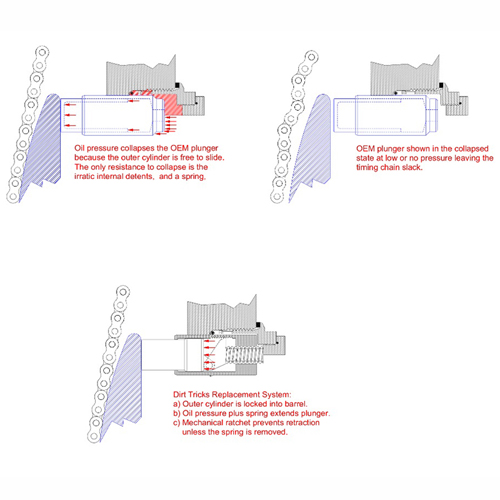 MSRP: $109.00
Now: $98.10
Was: $109.00
Product Description If you shred aluminum sprockets, we have the solution! What makes our Husaberg sprocket so superior to anything sold? One-Year Warranty Heat Treated Nickel/Chrome...

MSRP:
Now: $37.00
Was:
Product Description If you wear out your sprockets, we have the solution! What makes our KTM  front sprockets so superior to anything sold? One-Year Warranty – MADE IN THE...

MSRP: $10.99
Now: $8.99
Was: $10.99
This Folding Dual Sport Mirror is perfect for motorcycles that ride on the street and off. This motorcycle mirror features high quality construction and a fold-away pivot to protect it when riding...